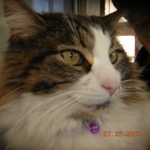 Senior, articulate and old enough to "say it like it is" so beware crummy web sites out there! That's one of the many joys of being old.

I have a lifetime of experience and appreciate respect, fair play and good quality. Sites run by people with power complexes need not apply.

Packages tied up with string: my animals and my husband in interchangeable order

Joss & Main
“Jossandmain.com is a newish site for me, but in my...”
Jossandmain.com is a newish site for me, but in my opinion, it's business practices are as old as the hills. I noticed a flash sale for Louis ghost chairs 4 for under $400. (chair of a clear plexiglas-like material.) Originally made by Kartell, they have been replicated like bunnies and the lowest price I had previously found was $129 each. Kartell has now added a low relief image of their name on the front cross bar of the chair to inhibit copies. The ones in Jossandmain had no such image. I ordered the chairs as priced with credit card and the company confirmed the order by email twice. These were a gift from my husband for my 70th birthday. Almost a week later I received a new e-mail. "There had been a mistake in advertising and the price was over $1500"."Now way" I said. "You have already accepted and confirmed the transaction"...'No" jossandmain.com replied "It was a mistake. We have put a hold on your credit card!" We went back and forth about that. Eventually, they offered the 4 chairs for half their new price which was still $750 and twice what we paid in good faith. We e-mailed that we had budgeted for $375 so we would take two chairs at their new offer. Their response was that ghost chairs can only be purchased in multiples of 4, which is, of course, pure tommyrot. I never got the chairs, but life is way too short to let let them spoil it.
Helpful (6)
Thank you
DuckDuckGo
“By now all of us know that Google tracks you, and...”
By now all of us know that Google tracks you, and also owns Yahoo. Its like finding a clingy person you don't know, trailing after you all over town and making notes on everything you do. WOW! George Orwell just winked at me! Well now, we don't have to worry anymore about this creepy problem. Duck Duck Go.com is a new browser that gives you complete privacy. It does not track or bubble its clients, and says this, right up front, in writing. Duck Duck Go serves up tons of concise info in response to your search. They even personally acknowledge you for using " the Duck" by email. So next time someone tells you to DUCK IT, you don't have to run for cover.
Helpful (10)
Thank you
G That's Awesome
“It's almost summer and the litter's gettin' high”
It's almost summer and the litter's gettin' high. I was talking to a retired cop in the dog park and he told me about a spray used by medical examiners in their workplace. It had also been formulated for use by dog and cat owners." It works", he yelled as his dogs dragged him away. "What- is-- it called?" I yelled "ANTI- ICKY_-POO." "Aunty -what -did -he -call -me?!" i muttered to my husband. We ordered and it came so quickly, we thought they might be- standing outside the door, ready to hurl it in. It was expertly packaged and came in a super strong spray bottle that you can use for all kinds of cleaning stuff again and again. Here's the kicker... ANTI-ICKY-POO WORKS exactly as advertised. It's ingenious. It cuts oder instantly. It's bio degradable! YEEEEAAAAAHHH. I use the unscented version and we simply couldn't be without it.
Helpful (2)
Thank you
Spekio
“I lost my purse recently.It was returned, with all...”
I lost my purse recently.It was returned, with all my property AND something else... a Complete account of ALL MY PERSONAL INFORMATION including my contact info, life history, and a picture of my residence; published on the web at spekio.com. This without my knowledge or consent And it applies to everyone in America who does not know about this site... THAT MEANS YOU! If you ask to be removed they just put your information back up in a few weeks. The way to discredit this site is to keep removing your self. This is a horrible feeling, BIG BrOTHERish AND SICK, sick SIck. Just have a look!
Helpful (1)
Thank you
Lands' End
“What a delight!”
What a delight! The quality of Land's End products is superb. Seams and hems are beautifully finished and the sizing realistic... none of this large = size 10 stuff. The fabrics are really good quality and the dyes fast. These garments are built to last, without looking like combat fatigues! The service and sales events tick all the right boxes and if you do need to return something, you can actually drop it off at a Sears or If you are ancient like me, you can always con someone into doing it in return for some dog or kiddie sitting. What's not to love?
Helpful (7)
Thank you
Gilt
“I haven't had huge problems with Gilt”
I haven't had huge problems with Gilt. Frankly, I don't go to it much because it LOOKS so expensive and whose paying for those graphics? I have found them terribly slow to mail out, but pleasant on the phone, and willing to put things to rights. And,. Oh yes, they once sent a pair of tights, that looked suspiciously like purple rather than grey. They had taken so long to arrive, I didn't bother sending them back. It was like... I am so over this! So, not making the big 4 stars yet, but keep on trying.
Helpful (5)
Thank you
Groupon
“I have one word for ideeli.com...”
I have one word for ideeli.com... APpALLING... ApPaLLING... APPaLLiNG, APpalLING... APPAlling,... ApPAlling...(sombody stop me)... appaLLING... APPALLing... A,,,, P... P... A,,,, L,,,, L... i... N... G...! Ahaaa that feels better.
Helpful (6)
Thank you

BEN hasn’t received any thanks yous.

BEN isn’t following anybody yet.

Was expecting my desk to arrive on a Tuesday. When it did it arrive, I checked the status of the...

I ordered furniture from Joss & Main because of previous good experience with Wayfair. I ordered...