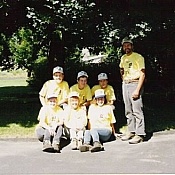 At this point I still have American family as my auto insurer and insurer of other things. My agent I use is located in Salt Lake City Utah, and I have to say that he and his other half have been amazing ALWAYS. Here is my "beef" with American family and I am positive it's the same way with other insurance companies and that is their "preferred" auto body shops that they want people to take their cars to. What I found out after my first experience is that the area manage or district manager who agrees to or disagrees to repairs is "in bed" with those owners of the preferred shops and I would not doubt for second that the manager is receiving some sort of a kick back to continue to use particular shops in your area. I found out that the shops are at the mercy of these district managers and what is going to be done to either fix your car on the cheap or fix it right. I am working on contacting the Utah State Attorney General after my experience. I just wanted to make consumers aware that at least with American Family your repairs on your automobile properly is at the discretion of the district manager. Not sure what we can do about it or which if not all have their "preferred" auto body companies they are getting their biggest kickbacks from if they are. I don't know for sure.

I am having a hard time grasping the fact that in a Republican majority state that there are so many Liberally ran news groups right here in Utah as there are! If you doubt it look into their articles especially recent ones. This review is being posted August15,2020. I don't consider myself Republican or Democrat as I vote based on a candidates moral character, values, virtues, and whether or not they are firm believers in God which says an awful lot about that person in my personal opinion. When a news paper, news media outlet, or a social media news group only go completely to the right or left and base their news on bias and half truths then they are no longer a reputable news source, again my opinion. So far KSL and The Salt Lake Tribune are known leftist news groups squashing anyone that speaks their minds in their comments sections and just not posting those comments at all if they do not go along with their political ideology. A person might as well go to the grocery store and start picking up issues of the National Enquire or the like for your news.

So it seems that KSL.com in Salt Lake City, Utah a Mormon owned news and social media outlet is officially Totally Liberal based! Today posting that 57% of polled Utahans don't want to see trump serve a second term, but if that were to happen a Liberal Democrat would become President in 2020, something that the majority of Utahans would be against! There are Liberal hard leaning articles posted and someone wants to post a comment thats against the opinion of the articles they wont even allow it unless the comment is totally in their favor! Time to drop KSL!

Shea hasn’t received any thanks yous.

Shea doesn’t have any fans yet.

Shea isn’t following anybody yet.

SLTrib has been hijacked by the radical left. Full of bias. Always negative about our POTUS. They...

My comments are clean and respectful but because KSL is an extreme left leaning rag they censor...