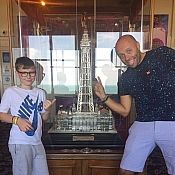 I purchased a segway board for a child's birthday in February, it arrived and was gifted but wouldn't charge. Eventually the company iWatboard.com arranged for it to be returned, inspected it and sent a replacement. The replacement was dangerous and faulty throwing the child from it and scaring her to the point she would not use it again. A video was taken of the fault and sent to the company. After several emails chasing to which I received no replies (apparently my emails had gone to spam - despite previous email reaching them with no issue to that point) they asked me to return and I requested a full refund given that I'd been let down twice with terrible products and it was now over 3 MONTHS since the little girl's birthday. They refused to supply details for the return, simply stating they would not refund (no reason given) despite seeing the spectacularly dangerous product they had supplied via the video and clearly not checked prior to dispatch.

I have contacted my credit card company to raise a dispute and claim the refund due.

I purchased from them as they were cheap but cheap clearly isn't always best. If anyone buys from them they should do so with great trepidation and a refund guarantee!!
Helpful (0)
Thank you