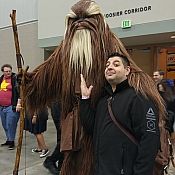 Entertainment Earth
“Warehouse ruins them”
Update 5/10/19 - I can no longer in good conscience recommend EE. I have received several more orders that were damaged, and the replacement was damaged. Both were issues of the pickers at the warehouse and not because of shipping. Ed had indicated that they would look into the incongruity between what the warehouse is saying and what is arriving. I received another order from them with another non mint item that was clearly picked bad. Their promises mean nothing if the warehouse cannot understand their role in picking mint items.

I have ordered twice from EE, and unfortunately, both times my items arrived not mint. As their policy is "mint guarantee", I contacted them. Both times, they sent a prepaid label for me, and found a replacement quickly. It rather is unfortunate that their warehouse pickers don't seem to distinguish between mint, and "whatever" as the items were so clearly not mind, despite sufficient packaging and no damage to the outside box. Both times, customer service was on it...just wish the warehouse didn't sour my opinion. Donald went out of his way to take care of me, so props to him!

Angelo hasn’t received any thanks yous.

Angelo doesn’t have any fans yet.

Angelo isn’t following anybody yet.

I recently preordered a couple items from this site and will not do business with them again. A...

Customer service is slow. Delivery dates are not accurate and delivery isn't cheap Some items...