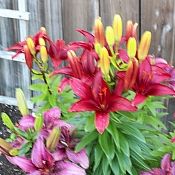 I'm originally from Uxbridge, ON and now reside in Northern ON.

I believe that everything happens for a reason.

Fishing, gardening and spending time with my grandkids.

I ordered flowers from Canadaflowers.ca, when the original flowers I ordered from another company, did not get delivered. I ordered on 05/14/18 and they were delivered as promised the next day. They were absolutely beautiful and fresh. I'm so pleased. I would definitely recommend this company.

I ordered Mother's Day flowers from 1800Flowers and they did not get delivered. I sent an email and got no response. They said they sent a voicemail to my home phone, which I did not get. When I called to find out what was happening I was told that the bouquet I ordered was not available in the recipients area. It's a mixed flower bouquet. That's it. When the service rep gave me product keys to enter so I could pick another bouquet, none of the product keys worked on the site, so I could not see what was being sent as a replacement. I could not get delivery on the date I chose either. The flowers were to be sent a few days prior to Mother's Day. Now they won't be delivered until two days past Mother's Day. This is unacceptable. I'm not happy at all. The bouquet that was chosen was also of lesser value and a refund will not be given. Stay away from this company. I've used them in the past and had no issues. It's going downhill fast. The other issue is that the call center is so noisy and it's hard to understand the agents. UPDATE: The second bouquet was not delivered either. They said there were no florists in the recipients area. There are over 100 florists in a 50km radius of the recipient's address. I asked for a full refund and am still waiting for that. Will update if I don't receive it.

Tip for consumers:
AVOID THIS SITE IF YOU WANT YOUR FLOWERS!!!!!!

When I first purchased from MDG I was happy. I made a second purchase and there was a typo on the agreement page. It said my payment was double what the agreed upon amount was. I pointed it out and the woman that was doing the order said" just ignore it. It won't double your payment it's a mistake." I believed her and that was my first mistake. I then called and talked to a supervisor and he double talked so much I got confused and thought I was agreeing on a fair payment for both purchases. I was wrong. My payment went down slightly but not what it was originally supposed to be. I'm afraid I won't be purchasing through MDG again because of this issue.

I ordered a year ago and today I get a text stating I had a non refundable order on the way. Went...

As with many of the other reviewers here, my experience was terrible. No delivery, many excuses,...