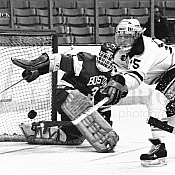 BobbyOrr
“I Agree, Ron Blanchard is a Shyster”

I ordered an unframed 7x11 print a few weeks back. When I spoke to Ron over the phone for him to guide me through the order process as a "Send In" I explained that I was a career photographer, a lifelong hockey player, and a history buff, and that my interest in purchasing the photo was all about the image, that I wanted to confirm it was coming from the original Ray Lussier negative, and that Bobby's signature was simply a bonus. He later confirmed to me IN WRITING that my print would indeed come from the original negative which he claimed had been "given" to them (Bobby Orr et al) by the Record American newspaper after Ray died.

Along the way I'd become friends via Facebook with Ray's son, Randy, and knew of the provenance of the original negative such that I knew Ron was not being honest about how they procured it.

In any event, I gave Ron the benefit of the doubt and placed $150 my order.

Not only was nothing shipped for over a week, but when I phoned Ron he told me that it had indeed been shipped even though the "track order" function on the website said it was "waiting for shipping."

Ron claimed that perhaps it had gotten lost in the mail, said they'd send another, and that if I received a second (which he knew wouldn't be the case) to let him know.

My print arrived the next day, shipped in a tube (which meant it needed flattening) and was so obviously not from the original negative as to be as comical as the "Certificate of Authenticity" which accompanied it.

Based on my photographic expertise my print was probably made from a copy negative of a halftone print gotten from the Record American newspaper.

I made a high resolution flatbed scan of the print to use as illustration in an email I sent to Ron to express my disappointment in the product he'd sold me not being what he told me it would be. As further illustration I also included in that email a high resolution digital file of an image I myself shot in the Boston Garden during the 1985 Beanpot hockey tournament while a freshman at Boston College and the Photo Editor of The Heights, the student weekly newspaper. The difference in image quality could not be more stark.

As predicted, I received no response from Ron to that first email, a second more forcefully worded email, or a subsequent text message.

In short, Ron lied to satisfy my concern about the source of the print I would receive, took my $150, sold me an utter piece of crap, and then, after being Mr. Congeniality to secure the sale, dropped off the communication grid with me.

And that, dear friends, is the true hallmark of a shyster and a con man.

From my experience with this website I would warn everyone do not spend a dime on this site. I...