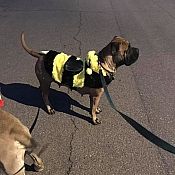 Berkshire Hathaway, Inc.
“Berkshire Hathaway”
Jeff told us there was another offer on this home. 6225 McCords in Alto Michigan. We paid 590.00 for an inspection and offered 356,000 and wasted our money. The seller did not disclose the flue on the roof was bad and he conducted his own electrical work so the wires were backwards. I was told by Jeff that the screens that weren't on the chimney would be a total of 75.00 and the caps and the flue to be fixed would total 500.00. I called a chimney company and they told me 3,500 to 7,000 to fix the flue. The caps are 300.00 to 400.00 each and 75.00 each for the screen. Jeff made it seem if we asked the sellers for anything that we are asking for to much. Why would I pay 7,000 more than the asking price then be stuck with a water problem on the home because the chimney had no caps or screens to keep out water or animals. Then on top of that the flue was bad which was not disclosed because it is apart of the roof and the seller caulked it knowing the flue had issues. Also, Berkshire Hathaway is a nonsense to deal with, they don't like to release your earnest deposit. Took me 2 weeks to get my deposit back as if I didn't lose enough. His boss Jim Face is the broker and doesn't care as well. These are people who have been give. Their jobs because their dads were in the real-estate business. They do not care about getting you the funds, then they make you feel inadequate because you want something fixed. I would not recommend Jeff or Berkshire Hathaway for any home buyer. I was tired of the way I was treated. Then Mr. Face threatens to call the law if you request your earnest deposit back. If they have a review as I see they don't I will leave my review because this was ridiculous.
Helpful (1)
Thank you

Stacielynn hasn’t received any thanks yous.

Stacielynn doesn’t have any fans yet.

Stacielynn isn’t following anybody yet.

I was interested in a rental. After 2 emails, 2 requests to tour, and leaving a voicemail, I...

I am a first time home buyer and expecting any day now. I couldn't believe the unprofessionalism...