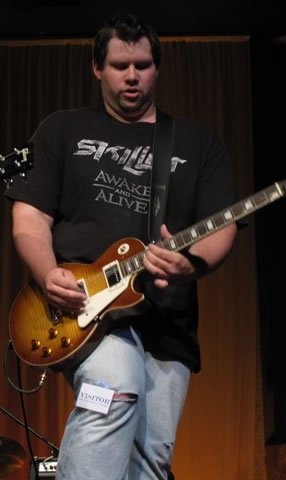 Avatar Speakers
“This site was a huge help when I was trying to determine...”

This site was a huge help when I was trying to determine what cabinet I should get along with what type of speakers to fill my guitar cabinet. I had no clue how many different types there were and they give links to other sites like Celestion speakers which gives demo's of the speakers. This is just a fantastic site and when I sent in an email, they replied within one business day. Great response. I'm also ecstatic about their prices. SO CHEAP. You can save $100 bucks if you just buy speakers or get the whole 4x12 cabinet for a fairly low price. There have been so many great reviews about Avatar Cabinets and they are all right.

Great website. I mean come on it's really sponsored by Mark Tremonti, he grew Fret12 into what is is now. I order two t-shirts and payment was easy and received my shirts just fine. Love it. Plain and simple.

Helpful (3)
Thank you
Guitar Center
“Well, coming from a smaller city that only has one...”

Well, coming from a smaller city that only has one local music store, World of Music, which can jack up prices as they want since they don't have any competitors, I often take drives out to Cleveland for Guitar Center, especially since they have two. I usually go to the one in Mayfield Heights and because of the store I was able to really find my sound. The website is very well developed and I especially like their used items section. I find that their willingness to ship the item from one Guitar Center to another is great. I'm not sure how the process is actually because I've never needed to do that. If I was someone, instead of actually using the site to buy and ship stuff directly to your house, I'd save up some money and go down to the closest shop. The experience inside the store itself has so much more power. The only negative thing I've experience with Guitar Center were the reps. I know they're doing their job by trying to sell and make money but I often find their strategy tiredsome. Also I had a guy flat out lie to me about what would the best way of financing would be... which the way he suggested would have given me the amp sooner but would have paid Guitar Center an extra grand.

Helpful (5)
Thank you
Musician's Friend
“I trust musiciansfriend to give me the most bang for...”

I trust musiciansfriend to give me the most bang for my buck. I've bought a lot of music gear from this site, along with the rest of my band and out of all the gear we have, the only problem that occured was electrical problems in my Epiphone G400. This has nothing to do with musiciansfriend compared to Gibson/Epiphone manifacturing. Still, this is one of the best music gear sites out there.

Helpful (4)
Thank you
Electric-guitar-guitar.com
“This is the same website but just changed from online-guitar...”

This is the same website but just changed from online-guitar-store.net which is nothing but a scam. People have been ripped off and a select few have actually received a guitar except those are built in poor condition. Almost word for word, this site says the same thing the older site did and offers the same guitars, same pictures, and same prices. Stay away.

Robbie hasn’t received any thanks yous.

Robbie isn’t following anybody yet.

I have used Avatar bass cabs or years. I own two 9f their B210 Delta cabs. I bought the first one...

GC is the industry giant for music equipment, but they treat their customers with wonderful care....