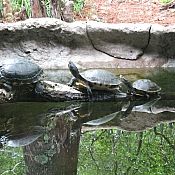 Shield Tech Security > Shield Tech Security Alarm Systems
“FALSE ADVERTISING & POOR CUSTOMER SERVICE”
I purchased an STS-410 security system from Shield Tech Security in October 2016. It came with 12 door & window sensors-5 motion sensors-2 key chain remotes & of course the Keypad. It was kind of problematic from the beginning but I worked my way through most of the issues myself. Their customer service department seemed unaware of what their products were and were not supposed to do. After about 1 year I decided to check each sensor and none were working because all the batteries were dead in them. I called and spoke to a guy named Andrew. He said they should be warning me with an alert before they died and told me a change to make in the keypad and that should solve my problem so I did. About a year later I walked out my front door without turning off my alarm and noting happened. Again all my batteries were dead in all 12 sensors. I contacted Greg Myers who informed me that these sensors did not have that option even though their website stated that they would alert you before they died. He stated that was a mistake on their website and thanked me for pointing it out. I still have all the emails by the way. He said he would replace them for an upgrade fee which I reluctantly agreed to pay since the sensors were advertised to alert you before the batteries died. We had about a 2 day line of emails concerning this which I still have by the way. Then all of a sudden he stopped correspondence and will not get back to me after extensive emails from me concerning this problem. It's been 3 weeks now and no responses. So if you purchased the STS4-DORT sensors and haven't been warned about this mistake and that they will not alert you before they go dead I'd complain. They have since changed the website to say that they will not alert you but I do have the emails showing that they were advertised to do this. The STS4-DORN states that they will alert you and so does Greg Myers for the company. Now all I want is to have my falsely advertised sensors replaced with ones that do what I paid for them to do. Doesn't seem to be asking too much if you ask me but obviously seems to if you ask Shield Tech Security. I'd be very careful purchasing one of their systems unless you are extremely tech savvy or you will have many problems.

C R Bradshaw
Helpful (1)
Thank you
Haw River Flooring
“WORST INSTALLATION AND CUSTOMER SERVICE EVER.”
DO NOT USE THIS BUSINESS. Paid over $2,300.00 for 2 bedrooms & hall carpet. The installer left nails sticking up through the carpet. My wife called and told them about it and they told her to tell her husband to hammer them down. If that wasn't enough, within 1 month the carpet started bubbling up. We didn't say much at the time because it wasn't that bad. It kept getting worse over time and was so bad that it was folding over itself and we were tripping over it within a year. We informed them of this after about 22 months and low and behold their labor is only guaranteed for 1 year. Had we known that we would have went somewhere else to begin with. Pretty shady huh? They finally sent someone to look at it and we were told that they would stretch it for us. We told them that the installation was sub-par and we expected it to be fixed. The person that they sent said he would be back in 2 weeks but we never heard from him. We called Haw River flooring and they said that they thought it had been taken care of. They contacted their guy and said he'd call us and reschedule that he had lost our number. Again the call never happened. So we called back and finally got a person to show up and stretch the carpet. Took him about 1 hour. So after 2 months of complaining we finally, hopefully got the problem fixed. At least for now. This was the worst installation of carpet that we have ever had and we are very unhappy with Haw River Flooring. Now it turns out that the guy they sent to fix it isn't even from Haw River Flooring and that they aren't going to pay him. They expect us to. You have to be kidding me. Oh and whatever you do, DO NOT PAY UP FRONT. Now I know why they tried to get us to pay up front. They know that the quality of their workmen is sub-par to say the least. Of course we didn't pay up front but we did pay in full as soon as the job was completed. Do yourself a favor and go somewhere else. And if you do use Haw River Flooring, don't say that I didn't warn you.

R B
Helpful (2)
Thank you
UNC School Of Dentistry
“DO NOT TRUST THIS FACILITY WITH YOUR CHILD”
A NIGHTMARE for my 12 year old daughter at this facility. My daughter needed periodontal skin graft surgery. We had it done at the UNC School of dentistry hoping to save money but also hoping for a good result. We got neither. The surgery took place on Thursday 02/08/2018. The packing that holds the tissue in place fell out before we got to our vehicle. The stitches started falling out the very first day. The protective netting covering the roof of her mouth fell off on day one. The stitches holding the removed tissue to her gum line had all fallen out by day three along with the tissue. We contacted the doctor that performed the surgery by phone on Sunday 02/11/2018 informing her of this situation. We also sent her pictures of the failed surgery. She accepted no responsibility for this failure and attempted to blame it on our daughter. We were refused a refund so now we are out all this money for the surgery and have to pay to have it done elsewhere by a more competent doctor. PLEASE DO NOT TAKE YOUR CHILD HERE FOR SURGERY. YOU WILL REGRET IT.
Helpful (11)
Thank you