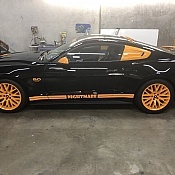 If you want someone to take your money and not give customer service, then these are the people. They're nice while trying to sell you some of their products, b ut that all changes if you've got a complaint.

I placed an order with these bozos and twice they sent me out the wrong item. And now that I have complained and told them how useless they are, they have red flagged my account. I was told that they no longer wish to do business with me. These people only care about themselves, not the customers. And Dan Harmon, who is a upper management supervisor, well, he will just lie right straight to your face. I would avoid doing any business with this company.

Helpful (10)
Thank you
ALTIUS Graphics
“Not a REAL graphics business”

This place is a joke. I'm not sure about the standards of these other people who left positive reviews, but mine was anything but positive. I take the man an item to match the color, we go thru some Pantone colors, and I choose one that's very close to my needs. I was told that they wouldn't print my stuff out until he had more work to do; that he did not want to waste material doing mine alone. I was called by the receptionist and told that my order was done. I was not called to come approve the color at all. Upon arrival I noticed the vinyl work that I had requested lying upon the table. But to my dismay, the color was not even close to the sample that I left with Sidd. And the curvature of the windshield banner was way off. I was given the excuse that that was the color the printer said to print. Sidd told me that his printer may not have the capabilities to print the correct color that I was in search of, yet other vinyl graphic shops have achieved this color in the past. Sidd told me that his shop is not like other shops. With the color being so far off, I should've never been called to come give an approval. And why would he print and cut the whole job out before verifying the color? And then he wants to complain to me that he's not being paid enough to spend time achieving the correct color. So in short order, he's telling me that the little jobs are not important to him; forget what the customer wants. After going back and forth with Sidd about matching the color, he finally tells me that he'll get his designer to make 2" X 2" color samples until the desired color is achieved. Great! Fast forward to today (5/21/2019), I called to see where we were at with the color samples, to which he told me that they were ready for me to look at. Again, I drove all the way over to his shop, compared the color samples that were presented to me, and alas, they created a color that was close enough, that I gave the approval for it. All was well until I reminded Sidd that the windshield curvature for the banner had to be redone to the correct curvature. It was at this moment that Sidd immediately told me that he would NOT rework the banner curvature; that he would just give me some single letters to apply in a curve. I told him that that was not what I enlisted him to do. His reply to me was, "we are not engineers here". I guess that was my mistake, thinking that I was in a REAL vinyl graphics business, that could create what the customer wanted. I WAS WRONG! I immediately retrieved my item with the color sample, told Sidd "no thank you", and left with nothing achieved. This man and this business wasted two weeks of my time. I do not recommend this graphics business at all, unless you don't want something custom or just some plain-jane design. And I do have a picture of what Sidd did and what he was enlisted to do. You be the judge. The car part is the color I asked for; the other is what he tried to say was right.

Randy hasn’t received any thanks yous.

Randy doesn’t have any fans yet.

Randy isn’t following anybody yet.

The products they sell failed me within a few months and I was not able to return them. The life...

Probably will be my last time buying from AM. Seems as if everything was fine until I spent my...