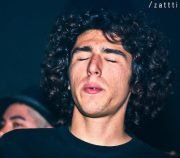 I'm 23. I should have graduated in Economics... but didn't. I'm in Buenos Aries. I ll be returning to USA in a few months.

Oh. well, I like to read a lot, about current events. world events. i find humans and human society/culture very interesting. I also like History and Futurology.

Twitter
“Twitter is an sms based social media site”
Twitter is an sms based social media site. Users can only write 140 characters at a time, meaning one tweet. Users can tweet as much as they want. There are fake profiles or persons that have more than 1 profile.
It works best when used from a smartphone. Pictures can be directly uploaded with a smartphone, also the ability to tweet in real time on the street, on a roof, park, beach, club, bar, concert, etc. Pretty much anywhere.
To get the most of the site you are supposed to use hashtags, which is basically just putting a numerical symbol in front of the keyword you want people to find. For example "Great game of #chess". So people will find chess. You can also search hashtags, to find what people are saying in real time.
Helpful (2)
Thank you
Wikipedia
“You actually don't need to do primary or secondary...”
You actually don't need to do primary or secondary schooling. You can just go straight to college. For that, use this website, plus books of course. As of right now the English Wikipedia has 3,945,605 articles in English. The German Wikipedia has 1,383,000 in German. The entire Encyclopedia has over 1 Billion edits. Its free for users to register and join to contribute content.
The website is very well organized. A little trick, Alt + X = random article
Helpful (1)
Thank you

Ramiro hasn’t received any thanks yous.

Ramiro doesn’t have any fans yet.

Ramiro isn’t following anybody yet.

Your favorite youtubers and celebrity's having tea is a very time consuming thing to read it...