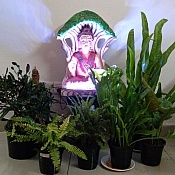 Purchased a health plan with OP claims eligibility and annual health check-up plans several months back, due to some technical issue from their end I am not able to book the annual health check-up ( which according to them has to be booked over their website or app) for the past 6 months! Their customer service is horrible, if we send a mail they understand the opposite, the next level is the grievance officer who can understand but not come with a solution and their final stage is even worse. Absolutely no reply completely mute to any emails sent so far. Complete waste of 20k

I ordered a name plate for Dussera, the website clearly mentioned delivery on the 23rd to Bangalore. When I checked on 22nd on 'Track your order' it was still in order confirmed status, when I raised a ticket I received a call from a customer service person asking me to look in to the terms and conditions of the purchase which gives them them relaxation to deliver late since it is another courier partner, the guy cleverly confirmed on phone that the order will be received by 24th but when he sent me the mail he didn't mention the dates. On 24th it was the same status and when I raised a ticket another email claiming that the order is sent via courier with a blue dart tracking id, when i checked the blue dart website the tracking id did not give any info, I waited for one more day and raised another ticket, received same response, On 26th I sent them another mail stating I will have to approach a consumer forum that is when they send me the actual order details. Looks like the order never moved an inch from Delhi and was sent to my home address only on 26th. Extremely dishonest approach.

Please accept our sincere apologies. We will put all our efforts to see that we make this right for you. Please share your order number so that we can resolve this at the earliest.

Pavan hasn’t received any thanks yous.

Pavan doesn’t have any fans yet.

Pavan isn’t following anybody yet.

Four days ago, I ordered a cake to be delivered to my father on Father's Day and received a...

Bad customer service, delivery been delayed even after placing the order in a timely manner. When...