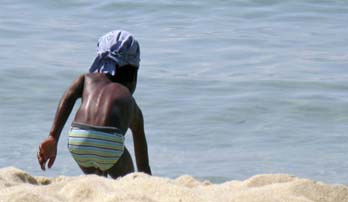 I have no idea how they got my email, but every day for over a week, I've been spammed by Domino's Pizza. I have emailed them and asked them to stop and it did no good. I marked it as spam and somehow they get thru the spam filters. I have never eaten a Domino's pizza and I never will. I would never support a company who does this!

I had my side storm door removed and there were gaps around the outside doorframe. I understood that the gaps could be filled in with either wood or foam and this would insulate the door for winter. It sounded easy enough until I took a closer look and researched my options. I knew I could not do the job myself so I called Budget Right Handyman. Enrique Soto came out and filled in all the gaps perfectly with wood he expertly trimmed to fit the gap. Then he went the extra mile and painted it. When he was through, you could not tell there had ever been a gap; the area looked like one molded piece. I am definitely calling Budget Right Handyman for all my future projects! And I will, of course, request Enrique.

Helpful (0)
Thank you
Target.com
38.1K Views
“Forget about getting your orders close to on time!”

I almost don't know where to begin on all the troubles I'm having this week alone with Target.com orders. First of all, I placed an order hours before the deadline to have a two-day shipment get here on Wednesday. I needed the cereal for Thursday's breakfasts. I was notified by the shipper that there was a delay - they had told me to expect it on Wednesday, as promised by Target - but it would be delivered on Thursday. On Thursday, I went to the site and saw that the shipper still had not received the items from Target. I called Target.com two days in a row and got totally incompetent "service" reps who just thought saying their sorry would fix it. Last nite, after the rest of the order came and still no two day items, I called Target.com again. This was at 7:30 pm. They said wait until the end of the day; it would come. I told them that it was impossible because the shipper still had not received the items. The "service" rep just kept repeating himself. The two-day order is now two days late and, tho Target claims it will be here today - 4 days for a guaranteed 2 day delivery - UPS only shows it is there; it is NOT on a truck for delivery.

My guaranteed next day delivery re-stock items, which were to be here today, are not out for delivery either. They have "shipped". These are coming from less than 2 miles down the street; they could have walked them here in an hour.

When things come, cans are always dented, sometimes badly. They don't seem to know how to pack anything. These are the nightmare packers you run into in supermarkets where the 16 year old boy puts your bread and eggs at the bottom of the bag. I guess that's where they recruit their shipping department.

My advice is DO NOT COUNT ON TARGET TO DELIVER ANYTHING ON TIME!

Helpful (1)
Thank you
Rakuten
29.5K Views
“Ebates made good on checks I could not cash”

I had been having problems with Ebates because I am disabled and cannot get to the bank. They persisted in sending me checks instead of letting me opt for gift cards. They have made good on all of it. I was contacted by the director of member services and he fixed everything. I was given a gift card for the checks I could not cash plus a little extra for my inconvenience all these months. He also assured me that, in the future, all rewards would be given to me in the form of gift cards.
If you are having problems with them, do contact customer service and get to the director.

After ordering a pizza I watched on the tracker it should have been delivered at 10:12 instead...

Multiple problems, about two weeks ago I ordered food at 11:15 PM, they cancelled my order and...