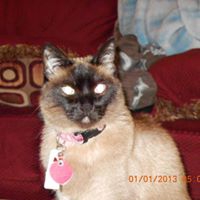 I shop on-line often as it's easier to find plus size close. although I have lost over 60 lbs. I'm still not where I want to be. Bra's have always been hard for me to find. but there are now great on-line store's that handle larger woman.

Animal Rescue, Or just anything involving animals. My Family

Amazon
“Great Place”
I have always receive good service when it comes to returning items. They have quality products. I do almost all my birthday and Christmas shopping from them.
Helpful (0)
Thank you
WomanWithin
“Good Plus Size Clothes”
They sell quality clothes for plus size woman. I have shopped there for years. Never had any problems with orders or returns.
Helpful (1)
Thank you
Hips & Curves
“Best Place Ever”
This is the best place that I have found for a plus size person like me to get sexy lingerie that looks good. And the bra's they have are just wonderful. I'm a 44C and that's a hard size to find in something that dose not look like your great grandmother would ware. I will continue to shop here. Love this place. :)
Helpful (5)
Thank you
AliExpress
“Worste place to shop”
I ordered some clothes from this on-line store, when I received the items 4 of them didn't fit. So I contacted the sellers, two of them gave me refunds with no problem. But the other two I have been fighting with sense November 24, 2015. They make you file a dispute with the seller and communicate through email. In my case I bought Skirts in size 2xL. when I received them that were to small. The seller wanted photo's showing that it was to small. So I took a skirt I bought from Torrid and there skirts. The size difference was about 2 inches. I sent them the photo's. I also told both sellers to send me a shipping label so I could send them the item's back. They would not do that. They wanted me to pay for shipping. This is a discount store, so I paid very little for the items. The cost to ship it back was $45. Way more than I paid. I told them this and asked again for a label. I got the same answer. form both "you pay to ship back". I had one of the sellers that would send me little emoji smiles when I told them I wanted my money back. They only give you a set amount of time to work on this dispute with the sellers. These to I had to escalate my dispute to the next level. That team wanted photo's also. So I sent them the photo's also. after several days of going back and forth. They kept telling me to contact the sellers. For which I was getting no where with. When I contacted the Team and told them this again, I would get the same answer, communicate with the sellers. so I tried going to there on-line help. That's a joke in it's self. It's like talking to a computer. I contacted them 4 times and would get most of the same answers I got from the last agent I talked to. "I understand your concern" or "I will help resolve this". These phrases were said over and over again, sometimes no mater what I said. This on-line store dose not have a phone number help line. Very bad thing. Never do business with a place that dose not have an 800 number. I finally contacted my credit card company and opened a dispute through them. I told both sellers that I had done this. One of the seller finally gave me my money back. The other seller however in my opinion is a Thief. There dispute department sent me another email telling me my claim was invalid and they were releasing the money to this seller. I told them again that I had contacted my credit card company and that I would be writing a review on Yelp and anywhere else I could. I don't want this to happen to anyone else. This started Nov. 24th and it is now Dec. 11th. I have never had to go through this to return an item that didn't fit to receive my money back, and then have them tell me that my claim was invalid and they were not giving me my money back. You shouldn't have to fight to get your money back for an item of clothes that dose not fit. If I were you I would not shop here. In my opinion They are Thieves. They will steal your money if your not happy with your purchase. If I could give them a 0 star I would.
Helpful (4)
Thank you

Kathy hasn’t received any thanks yous.

Just received my ground round solar lights they're amazing They look really good I've had a lot...

Nice and brilliant work from Amazon it offers as it shows in the logo from a to z. Nice delivery...