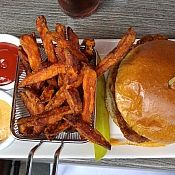 I'm not negative, I just like to give other consumers the heads up!

I tell it like it is! If I don't like it, you will know about it. It's the honest truth! If I do like something, I will give credit where credit is due!

Wilma W. – HerRoom Rep Over a year old
Hello Kristen - I appreciate your comments left here, but I respectfully disagree. We sent you a return label based on your claim that the garment was defective. When it arrived and was inspected, the garment was not defective. Your claimed fraying was a few threads at the end of a seam that the seamstress did not clip close enough to the seam. Additionally, there were clear signs that the pants had been worn. Given their used condition, and the fact that we did not find any defect with the garment, they were returned to you.

Tip for consumers: Search around, Kayak and other travel sites are much better.

Helpful (2)
Thank you
Jet.com
“Jet?? Sorry, more like BLIMP.”
Ok, when I first started using Jet.com, I thought they were great. They products were good, prices were competitive and the shipping was really fast. I would use them a few times a month and here and there, had minor problems. Once I ordered salsa, and out of 4 jars, 2 came and were damaged. The tops had been "popped" and one was dripping. When I called Jet, I had to jump through hoops to get two new jars! They made me take pictures, email them proof, etc. It was two lousy bottles of salsa, but I did it and received two new jars. Once after that, a bottle of shampoo came and the top was off. That was a mess, my entire order was covered with shampoo. Again, more hoop jumping with pictures of damaged items, etc. After that, I realized that anything liquid was not a great choice when placing an order! Well, I just placed my most recent order over 2 weeks ago. What was supposed to arrive in 2 days, has still not arrived over 2 weeks later. I called and didn't really get a warm response from the rep. I had my order number but used my work email and it wasn't coming up for some reason. He was telling me that he could SEE my order, but couldn't give me info because I couldn't give him the correct email address! I had my home address, name, credit card info, etc but nothing. It was a bit frustrating and I was also told that no other manager or supervisor would help. Really? Must be great to work at an office where you are manager free!!! So, now I will contact my credit card company and cancel the charge. I have no idea where the shipment is, and can't check it without the email address. Maybe I typed a wrong letter? Maybe they have something wrong on their end? Not sure but this type of customer service is bull. I won't be shopping JET again, it's not worth the aggravation!
Helpful (8)
Thank you
ShopRunner
“ShopRunner? More like ShopCrawler”
Ok, if I wasn't getting this service FREE with my Amex, I would be pretty upset. I have used it many times and the "two day shipping" is never less than FOUR business days. Not just two business days, but usually four or five! Plus, now I notice that some stores have a $25 minimum before Shoprunner is free! Outrageous. If you have to pay for this service, save your $$.. It is totally not worth it. They really should change their policies and not be promising two day shipping. It NEVER works out to two days!! Perhaps they are using donkeys to ferry packages instead of planes and trucks? Not sure, but the only thing I would do is to RUN from Shoprunner and not use it in the future for packages you want shipped immediately!
Helpful (7)
Thank you
Tommy Hilfiger USA
“Great prices, if you search everyday and keep returning stuff!!”
I found some great shorts on this site for the summer (it was still only early April) so I ordered three pairs. Free shipping, thought it was a steal. Each pair was marked "down" to $32.99. The very next day, after I placed my order, I discovered that the shorts were discounted! They were now $28 a pair. I called and was told I would have to return the original order when I received it, and place a new order. I did, and then two days later, received an email from them saying GREAT SALES. Well, now the shorts were discounted to, wait for it.....$16.99!! The SAME PAIRS OF SHORTS!! I was furious. I called again and was told they don't price match, I could re order AGAIN and return the shorts that I had previously ordered (still didn't even have them yet). I was so fed up, I returned all of the shorts to an outlet store, and ordered the same 3 pair for $16.99. I mean, that is literally HALF of what I paid for one pair of shorts originally!! Terrible business practice...they could have just credited me the sale price, I hadn't even gotten most of them by mail at that point! Never again Tommy, NEVER AGAIN. (ps the shorts are great quality and look nice, but I can't deal with their policies!!)
Helpful (0)
Thank you
thredUP
“Rip off...better off dropping your clothes in a bin!!”
Thought this website would be great...sent in a ton of clean, some items with tags, etc. Got an email about a month later, saying 4 items were accepted and I made a whopping $5. WHAT?? I know I sent in clothes that were on the "accept" list...what the hell happened to the rest of my stuff? I think this site is a big rip off. Would rather just drop my stuff off at a local shelter and see the stuff get worn, not get ripped off by this company.

Tip for consumers: Run, don't use this site!!!

k hasn’t received any thanks yous.

k doesn’t have any fans yet.

k isn’t following anybody yet.

My family and I often shop here. Variety of products. And they have affordable prices. Next time...