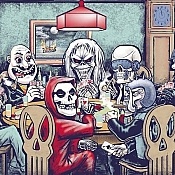 Myspace
“Big sad.”
Remember The days when your feed wasn't saturated with fake news and political posts? Your data wasn't being sold to the highest bidder? You have full control over what you did and didn't have all over your page? That's because you remember Myspace.

It's honestly tragic this website was killed by Facebook and Twitter. Given the state of things with social media these days.. ( Facebook and Twitter have this tendency to hold a daily contest to see who's Cesspool runs deeper) I know I'm not alone in saying I really wish it would make a comeback.
Helpful (0)
Thank you
Meetup
“Pleasantly Suprised”
So the past couple years I'd become a bit of a shut-in. I was looking through the Google App Store and I came across this. Decided to take a chance on us a little over a year ago and I don't regret it one bit.

Meetup is basically an app it helps to connect you to public events that may fit in with your particular set of interests. It helps me find a board gaming group in my area that meets up once a month. Once every couple of weeks we have a community clean-up, this popped up on my feed once the trashtag challenge started to become a thing. So it really helps me to get out of the house every now and again and it's connected me to some pretty cool people.

The only reason I put up a four-star review in lieu of a 5 is because of the fact that I do live in a rural area oh, so the fact that I have anything coming up in my feed at all is quite astounding. I would recommend this for anybody looking for activities so long as you live in a slightly more populated area.

If you're curious, go ahead and give it a shot. It's free and it definitely helps if you're looking for something that's out of your daily routine.
Helpful (0)
Thank you
Match
“For those of you who are unaware:”
I know there are some of us who don't necessarily follow online media. Let's face it, some of it is about as accurate as weekly world news. However, should you Google "match group scandal" you may find yourself unpleasantly surprised.

Let me break it down for you: match.com is owned by the match group, as is plenty of fish, Tinder, and hinge. Recently, they got caught in the act of utilizing Shady business practices. What they were doing.. And Tinder is STILL doing was sending people emails and blurred photos of fake matches. I've always felt these Services utilized a pretty poor business model. And seeing how they were trying to trick people into paying for a membership by utilizing this tactic it just makes me feel dirty. I mean, a lot of us have success with online dating and a lot of us has horror stories. It honestly feels like all of this is split right up the middle. So when you knowingly dupe a potential customer into paying for your service by utilizing a bot you throw that "we take catfish seriously mentality" right out the window.

All this does is reinforce the fact that many of us should just get ourselves out there in the real world and join some sort of social function like a board gaming group, local cleanup effort, or other community event, and not rely so much on a computer to play matchmaker.
Helpful (7)
Thank you
Zoosk
“Wow.. Just wow.”
Okay, I've been out of the dating game for a while - as stated in a previous review. I've been using Zoosk for about a month and I have yet to pay for the profile and after last night, I'm probably not going to. Please allow me to clarify:

So I filtered my search results two women between the ages of 24 to 37 in my area in a 20 mile radius.

Within 30 minutes I'd reported five profiles for reasons ranging from they'd been on there forever, seriously, good thing about living in a small community is that you know some of the people that are going to show up in your results, and some of them have been happily married for five or more years. So dead profiles. To catfish accounts, one of which was using a profile picture of Anna Paquin. And finally, the biggest red flag and the point I'm going to talk about the most are three accounts that belonged to minors.

One of these girls is a close friend's younger sister. She's 14 years old and supposedly verified her account via Facebook.. she follows me on Facebook. Not only was her profile picture the exact same as her FB Zoosk profiles.. her account flat out says she's in high school. Earlier that day, she was talking about how amped she was to be starting her sophomore year.

So this begs the question, do they actually have somebody monitoring Facebook verification, or is it left up to some random bot?

And here's my biggest qualm: this is a problem that isn't difficult to combat. I mean, for crying out loud there's a good portion of groups on Kik that require you to send a picture of you holding a random object, touching your nose, or holding up a piece of paper with a time stamp and date on it.

Why is this concept so foreign to these dating services?

I'm a single parent, I've had to move around a lot the past few years, and my child is autistic. I can tell you that the sex offenders registry is ever-growing and very real.

So I wonder how a company such a Zoosk would feel knowing they were complicit in a potential assault because they neglected to actually verify a profile.

I tried to contact them via their customer service email and I was told that I would have to wait two to three days for a response and so I decided to try and get in contact with them via Facebook Messenger, only to have my conversation muted. That's the virtual equivalent of telling me to STFU.

There is no way they're going to be getting any money of mine. I suggest anybody who gets into the service takes a buyer beware approach.

Tip for consumers: Don't. If you're looking for a date, join an IRL singles group, maybe an activity group, just put yourself out there for real.

Helpful (3)
Thank you
InterracialPeopleMeet
“2nd O.L.D. service - I've reported today.”
Like I said on the topic title,yes, this is the second online dating service I've had to report today - but thankfully this time it's for a completely different reason.

Okay, where to begin? This site is run by the same company as be naughty ( they're well-known for catfishing).

Filtering search results does not allow me to filter by age. I have no problems dating a woman a couple of years older than me, but when I'm being matched up with women in their mid-to-late 50s there's a problem.

Filtering by distance is a joke. I was looking for women no longer than 50 miles away from me and still being matched up with women in New York and North Carolina.

Not going to lie..
I've been out of the dating game for 9 years. My area doesn't offer a lot as far as the dating pool is concerned.

But anymore, it seems like this oversaturation it's just as heartbreaking as it is prolific.

In any case, I should probably go out and grab a couple of scratch offs.. I have a better chance of winning 500 Grand from one of those than actually finding a real person with the hope of a real future through any of these "services."
Helpful (0)
Thank you

JD hasn’t received any thanks yous.

JD doesn’t have any fans yet.

JD isn’t following anybody yet.

I miss the glory days of myspace. It was the best days any social website have ever seen. I hope...

this is a very good web site for all music lovers Marian Hayes.