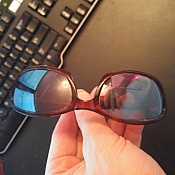 EyeglassesDepot
“Amazing Huge thanks to Arsenio”

Arsenio has been an absolute pleasure to work with. My 8 year old had an accident while playing which resulted in his glasses falling off and being stepped on. We had very recently found out that he had poor vision and would have to wear glasses all day, every day. He was not happy about the idea until he found a pair of glasses that he absolutely fell in love with and thought they were so cool. Instead of being upset about wearing glasses, he was actually excited. He couldn't wait to show his friends at school and tell everyone that he picked them out all on his own. Not once did I have to ask him where they were, or why he didn't have them on. Everything was great until those glasses got broken after a little over 1 month of wearing them. We had an extra pair that looked absolutely adorable on him, but in his mind they just weren't the glasses he chose that helped him feel confident a himself when he had them on. He spent the weekend wearing the extra pair and kept getting frustrated because they just didn't fit him the same. The first day he was going to be wearing them to school didn't go so well. I stopped in front of the school to drop him off and when I turned around to have our usual, "have a good day/I love you", exchange, I could tell something was wrong. He was trying not to cry, but I could see there were tears in his eyes. Naturally, I asked what was wrong and that's when the tears started coming. He asked if it would be OK for him to just stay home for the day. He wasn't offering much of an explanation at first, but once he calmed down he told me he was worried about his glasses. It broke my heart. I let him stay with me for the day and we drove around trying to find the frames for him, but had no luck. I searched online only to find the frames he loved so much were discontinued and almost impossible to purchase. Finally, I found a website that had some in stock and purchased 2 pairs. I was contacted by Arsenio to let me know that I would be able to get them, however, there would be a delay with the delivery. I searched online again, hoping for faster results and ended up finding another place to purchase from and asked to cancel my order. Arsenio asked if I would mind letting him know where I was able to find them, which I did. The site happened to be a partner company which actually did not have them in stock. He gave me the news and I contacted them to find out Arsenio was correct and I cancelled my order with them. Thankfully, instead of cancelling my original order, Arsenio waited to hear back from me. He went above and beyond to make sure the order was successful and even worked closely with me on modifications of the original order at my request. Arsenio personally communicated with me throughout the entire process and provided me with updates every step of the way. I am positive that my experience would not have gone well if I hadn't come in contact with Arsenio. Someone else would have cancelled my order as I requested and never took the time to ask questions to confirm my decision. I'm sure I would have found a solution to prevent my child from losing confidence in himself and feeling out of place as the only child in his class having to wear glasses, but because of Arsenio there is no need to worry. He had no idea that on the opposite end of this transaction, an 8 year old was being consoled because he was emotionally breaking down over his image. Arsenio was simply doing his job and deserves to be recognized for the extra steps he's willing to take that most people in his position wouldn't consider spending time on. I am truly appreciative of everything he's done to turn the outcome of this unexpected situation into something positive when I was beginning to think was impossible. Good people with good intentions are often taken for granted and are rarely shown the appreciation they deserve for the consideration they have for others. I want to thank Arsenio for being the person that he is. Aside from this review in his favor, his kindness to me has been of little benefit to himself and he truly deserves much more.

Both sunglasses look lovely on had 30% off the original price which was cheap anyway and came...

Bought Ray Ban sunglasses which didn't suit so returned for an exchange and was very impressed...