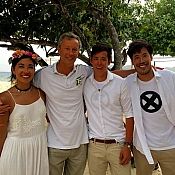 Lycamobile UK
“Airport SIM scam”
So you arrive in the UK at Heathrow wanting a UK SIM for your phone and Lyca Mobile are there waiting to cheat you.
They sell expensive SIMS that don't work and lie to you about putting credit on your phone. You leave quickly wanting to get out of the airport before realising you have been conned.
The SIM is useless there is no credit and no data meaning you will ultimately have to buy another SIM.
If you call them on your handset the calls are charged and as your phone has no credit you have been well and truly cheated!
Helpful (2)
Thank you
Golden Sands
“Dubai business & pleasure”
If you are looking for somewhere to stay which is well priced, efficient, friendly staff and located in the heart of Dubai this place is great. This is not 5 star luxury but good accommodation with plenty of space and a small kitchen with fridge.
Loads of good restaurants and supermarkets nearby as well as nice beaches making this a great place to stay
Helpful (1)
Thank you
Central Bank Of Cyprus
“Cyprus”
So where to start as have had poor experiences with dealings in Cyprus for a decade or more. It is hard to believe this country is in the EU and it shows that the EU lacks moral leadership when it comes to tackling inefficiency and corruption in the weaker EU countries.
FBME bank is one of the latest scandals to hit Cyprus after the many property developers cheated clients with off - plan developments which were never built.
FBME has caused many small business's to go bankrupt and the Central Bank of Cyprus took over FBME a few years back.
To say the Central Bank of Cyprus are useless, lazy, corrupt and inefficient is an understatement. They have totally failed genuine customers and not returned their monies despite promising the opposite.
On top of the that the people in the Central Bank of Cyprus are uncaring and have no interest in helping clients get back what is legally their money.
If you are ever considering setting up a business, bank account, retiring or doing pretty much anything in Cyprus DON'T unless you have a lot of money to lose.
Helpful (1)
Thank you
HomeAway
“Sad”
I have been with HomeAway for over 10 years and they used to be a great company. In the last two years they have fallen apart and are now just a headache for owners and travelers. The concept of making life easier for both owners and holiday makers is great and as a small company they were very successful.
As they have got bigger and the sharks have circled they are now useless, uncaring and basically crooks.
I am very disappointed how quickly they have spiraled into being so abject and any recommendations as to the new kids on the block who do this let me know and am not talking AirBnB
Helpful (15)
Thank you

We booked with homeaway back in January 2020. Owner of the property rejected the booking straight...

Due to the effects of Covid-19 I was forced to cancel a booking. The initial listing of the...