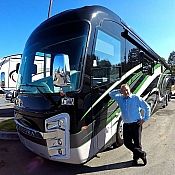 Musikhaus Thomann e. K.
“Terrible Service,”
I have just had the misfortune of order a Gibson guitar from Thomman, which arrived in perfect condition but was totally unplayable due to several problems from the manufacture. Thomman claim on their website that they check every guitar but when I asked they simply take a box off the shelf and ship it. I was told that for them to send me a new one as a replacement they would either need to have received the faulty one back or I would have to pay again. Understandable I suppose, so I paid again for another Gibson, after waiting for 4 days for delivery I checked the scheduled UPS date of delivery only to find out the Thomman had reversed the delivery as they claim that all Gibsons are like the first one I received so I wouldn't be happy. So when I asked if they could credit me for the second one (the first one was still in transit back to Thomman) I was told No they had to wait until the parcel they return before it even arrived at my home address would have to be received back before they would credit me.
Long story short. I chose another make and model and Thomman then agreed to set it up and ship it Express delivery. Which they claim they did. Now they tell me that something must have gone wrong with UPS (blame someone else) and it was on a standard delivery. So still I have no guitar.

Thomman used to be really slick, now I would really think twice about ordering from this company again. Terrible experience.
Helpful (5)
Thank you

We are really sorry to read that you are not satisfied with our service.

The Gibson's guitars are checked by our supplier. in case you wish to have an extra setup our special check in the future, please let us know in advance. Once the order is shipped out, we can only ask our driver to return it.

The last guitar you have received has been specialty checked for you by our quality control service and shipped out by Express delivery 48h without extra cost as requested. We would like to reminder that a standard delivery takes approximately 72 to 96h.

We thank you for your understanding

Glenn hasn’t received any thanks yous.

Glenn doesn’t have any fans yet.

Glenn isn’t following anybody yet.