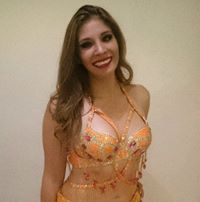 MakasBoutique
“TERRIBLE CUSTOMER SERVICE AND TERRIBLE PACKAGING”
Ordered a Baccio Dress. It is a type of dress that is painted over with puffy paint and then embellished with crystals. They stuck this dress folded in a USPS envelope. It was also wrapped with a hot pink paper. I ordered it to Miami. Needless to say. The paint became a little soft in the heat. As the dress was folded/rolled the paint stuck to itseld, the crystals to the paint (which left marks) and the hot pink papet to all of the paint.
My wedding was overseas and I had to leave before the dress arrived. I had someone bring it for me (I had no idea the packaging had been so terrible) I immediately contacted them. I even recorded a video and sent it to them.. Too bad they said that since someone had bought the dress for me, they would not do anything. No refund, no coupon for a later order, not even an apology. I will never buy from Maka's again.
Helpful (4)
Thank you

Gabriela hasn’t received any thanks yous.

Gabriela doesn’t have any fans yet.

Gabriela isn’t following anybody yet.