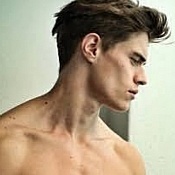 I honestly don't know what to say about me. I don't think my marriage status, or my level of education, would be of much interest to others. Let's just say that I'm in a relationship right now, and that I feel very happy about it. I'm very much in love right now, that's all that really matters.

I'm a very elloquent young man. I always speak my mind, no matter what. Once I start talking-or, in this case, typing- nothing can stop me! I'm new on this site, but I will do my best to write more such reviews. I'm very passionate about everything I do. I strongly believe that every single reader on this site has the right to stay fully informed about everything that's been going on, when it comes to website you just visited.

Television, football (you may call it soccer), TV shows, pop music, and a lot of other things.

When it comes to Star Trek, many things changed over the years. In the beginning, everything was different. There was no money, no credits, no holodecks, no androids serving as Starfleet officers, and many other similar things. Each new TV show made ST even further apart from the original concept designed by Gene Roddenberry. He had something else in mind: a pacifist utopia on a cosmic scale, where all diversities of life in the infinite Universe matter. Later, Star Trek became more and more agressive and violent over the years, similar to its greatest rival, the Star Wars. With each new season on some ST TV show, we get to see yet another ground rule being broken. Recently, a ST reboot was made, with an idea of some alternate reality where planet Vulcan is destroyed and there is no Vulcans to initiate the First Contact. In my personal opinion, Vulcans are crucial to entire Star Trek universe. Without the Vulcan, nothing make sense, not even the United Federation of Planets itself. Although Gene Roddenberry always insisted on having much more powerful female figures included in a story, we had to wait for ST VOY to get a first woman captain of a star ship. Additionally, some changes only confused the Trekkies, such as Lor, Data's evil twin. How can an android robot, without any emotion whatsoever, ever be evil?! Yet another example of ST losing a compass over the years is a concept of Tuvok, who supposed to be pure-blooded Vulcan, yet it was never explained how come he's so different from any Vulcan we ever saw before, or after that. The same goes for his wife. They had to be unique in all the ST universe, considering the fact the couple is much more similar to other Klingons out there, not to other Vulcans. Speaking of Klingons, even the ST canon screenwriters have to give some kind of valid explanation on why the Klingons from TOS don't look anything like those in let's say The Wrath of Khan. Remember that famous episode about the tribbles anyone? My conclusion is quite simple: over the years, Star Trek deteriorated, and recently it was surpased in many ways by a rival Star Wars franchise, if not by anything else, then consistency. Unlike Star Trek, which constantly changes over the decades, Star Wars essentially stays the same, no matter what. One might say that Star Trek got defeated by Star Wars. Of course, many Trekkies tried to stay loyal to TOS ideals, creating some of the best fan production ever in science fiction, yet those are just the web shows we're talking about, with amateur crew. The official ST movies and TV shows are not even close to TOS. One might say they are millions of light years apart. Looks like Star Trek is losing a battle with its biggest rival. In a continuous battle between phasors and lightsabres, so far, the lightsabres prevail.

Tip for consumers:
Try the alternative! There are so many other great sites out there made for you to upload your videos.

Tip for consumers:
Avoid at all cost, if you wanna maintain your mental health, as well as your sanity! There are so many much better social media sites for you to join. Fanpop is pretty much how the Internet hell would look like.

Filip hasn’t received any thanks yous.

Filip doesn’t have any fans yet.

I have place 4 consecutive orders with Star Trek Shop. One order has been delivered and is...

I ordered a personalized Coffee cup with the "Live long and Prosper " on it. When I received it...