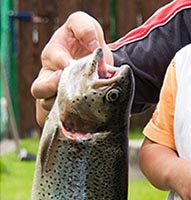 ... my sipping tea in a bathing suit is far worse. Why? It proposes that a man can feel comfortable in their own skin. Chatroulette and sites like it DON'T WANT THAT: The opportunistic tyrannists who run Chatroulette would like to sexualize every child and adult -- hoping females become Chatroulette sex models and men become their clients. If people were able to look beyond the human body as a sex object, sites like Chatroulette would lose power. So keep banning wholesome people like myself and perverting the masses with your dystopian brainwashing techniques. It will get you nowhere. And your owners will be tried in court for years of sex trafficking, pedophilia and general sexual abuse of anyone who came to your sites expecting to have a civil conversation. Your twisted business model, based on inciting and encouraging sick lonely men, will be a but a fleeting failed dream involving the corruption of yourselves as much as those you tried to exploit.

After being assaulted by one huge penis after another, an Omegle sex model called me 'mangirl' and asked what I was doing. I told her I was talking to people (of course) because that's what the site was for. I told her I was also sharing my YouTube channel with people. I gave her a link. She looked at my channel. Then came the familiar laugh, followed by the familiar white screen 3... 2... 1... Bang! Now I was looking at a girl in a Chaturbate room fingering herself while giving fellatio to a well-endowed black man. Dear Omegle: this is not a joke. I'm probably not the only person you're treating this way and I think you should be ashamed of yourselves. Suspicions tell me that you are most probably aligned with Facebook/Microsoft/YouTube and many of the other corporate elites who only find it necessary to be moral only when they are threatened by other corporations whose advertisements directly fund their very existence. However, it is ethically wrong to bait users aging from 13 on up and then proceed to carry out your sick agenda, which includes showering them with advertisements for companies whose names I can't even mention as they are the virtual equivalent of a fetish brothel. Leif K Brooks may be laughing his way to the bank for now, but like Epstein and so many others his days are limited. The college educated humanitarian persona will someday be exposed for what it is: a porn peddler to children, pedophiles and incels who simply go on your site to share their nerdy YouTube channels and whatnot. I am incredibly disgusted by what you have allowed Omegle to become and at the way you treat people like me... the virtual equivalent of dragging us out of the coffeehouse and tossing us into the sperm infested floor of a peep show booth. Scoundrels always atone for their sins, especially when there's children (including the child in all of us) who are assaulted in the process.

Dario hasn’t received any thanks yous.

Dario doesn’t have any fans yet.

Dario isn’t following anybody yet.