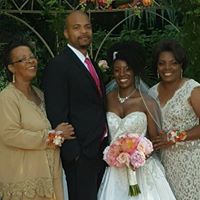 ThePros
“Horrible Wedding Video With important parts missing”
We used The Pros for video and DJ. The DJ was fine but the video... not so much.
The list of things that were so wrong with our experience is so long.

1.75% of the bride walking down the aisle was not captures
2. The 25% that was captured you could only see her shoulders up
3. The video of the bouquet toss ends before the bouquet leaves the brides hand.
4. When we asked where the rest of the video was, the manager claims the videographer accidentally pressed the pause button.
5. When the videographer arrived I told him to check in with my soon to be wife so he could film her and the girls getting ready. He left and came back and told me that he did and that she wanted him to film me and the guys. He lied, he never talked to her.
6. The videographer gave no direction of what he wanted us to do in non-candid shots.
7. The videographer got in an argument with the photography and audibly called her a $#*!.
8. The videographer was very awkward and had poor communication skills.
9. The videographer kept dismissing our attempts to meet with him before the wedding
10. A lot of the video was shaky
11. You can see him switch lenses in the middle of moments like the bride walking
12. We paid him for 8 hours, he only worked 2.
13. By that I mean he sat there for the whole wedding, but only got up to filmed things when he though they were important.
14. He didn't think the garter being put on the lady who caught the bouquet was important
15. He didn't think our mothers being escorted down the aisle was important.
16. He didn't think the maid of honor and best man walking down the aisle was important.
17. Only one of groomsman/bridesmaid couples was important to him.
18. He filmed the sky a lot
19. He filmed people sitting looking bored before the wedding a lot
20. He didn't ask us any questions about what we wanted.
21. The cake cutting is just a video of our backs
22. The 10 min long ceremony was condensed to 2 minutes.
23. All our guest described him as weird and rude and and said it seemed like he didn't know what he was doing.
24. He filmed a bush
25. Most of his shots were from bad angles.
26. A good number of shots were blurry
27. He overused zoom
28. He zoomed in on women's breasts multiple times
29. It took him 20 mins to "change angles"
30. When we asked what he wanted us to do he said "Walk around"
31. For his non-candid shots he only shot them around fountains, no creativity.
32. He wasted too much time of our less than 2 hour on multiple attempts at an ending shot.
33. The full raw footage looks like he was only filming it to capture enough for a highlights video.
34. When we got the video the title screen had the wrong date.
35. We went to complain about the video we were directed to a guy named Vince, he was hard to get a hold of.
36. Once we talked to Vince, he defended the videographer by blaming us.
37. Vince blames us for not requesting more time... (Every thing we want him to capture happened during the 8 hours we hired him for, so that wouldn't have helped)
38. Vince blames us for not getting the premium package
39. Vince blames us for being from the east coast. (He said putting the garter on the person who catches the bouquet is an east cost thing so the videographer didn't know to film it)
40. Vince blames us for the videographer not filming even though the DJ announced that an event was happening.
41. Vince blames us for the videographer being ignorant about wedding traditions
42. Vince blames the exclusion of key likes the bouquet toss on accidentally pressing the pause button.
43. The videographer must not have known how to work his camera.
44. Vince told us he would get back to us in a couple of days with his "resolution" for us
45. Vince didn't get back to us for a week.
46. When Vince got back to us he told us to call him.
47. We had to play phone tag with Vince for a day.
48. Vince's resolution was offering us an edited version of the horrible video we received... that would still be missing all the parts and have all the problems we have been complaining about... just in a more condensed version.
49. I had to use my angry voice and tell Vince I was insulted at the offer, that what should have been a great way to remember the happiest day of my life was ruined and that if he couldn't offer a refund or better way to compensate us for the tragedy that is us missing the opportunity to have a decent video of our wedding by early morning that I would take whatever action necessary to right this injustice.
50. Vince didn't heed my warning and now I'm making sure that no one else is blindsided by this like we were. My wife and are filing a chargeback, posting reviews everywhere we can and creating pages, posts and blogs to make sure that the information is out there that The Pros are far from that. They are a scumbag company that buries their negative reviews and tricks people into buying the lowest class product possible. Nothing but a SCAM.
Helpful (1)
Thank you

CM hasn’t received any thanks yous.

CM doesn’t have any fans yet.

CM isn’t following anybody yet.