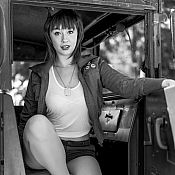 SallyFashion.com.my
“Horrible scam”
I made 2 orders with them and I received everything but 1 item. I contacted them immediately to say I was missing an item and they kept saying it was coming. After close to 4 months of being told it was coming they started saying the tracking number stated it had already arrived then they stopped answering me. I eventually had to go through Paypal and they sided with the company due to "proof" from the tracking number saying I had received the item. Never got it, still out $100 and still pissed over 8 months later.
Helpful (4)
Thank you

Chantal hasn’t received any thanks yous.

Chantal doesn’t have any fans yet.

Chantal isn’t following anybody yet.

Terrible quality clothing and it is a complete scam. Clothing comes from China! The owner of...

Why? - The sizes are not right at all (I checked the sizes stated on their website as well)!...