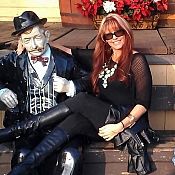 USVitalRecords.org
“Scam. They do nothing”
I filled out the info for a birth certificate. All they did was retype the information on an application, said it had to be notarized, and sent in with another 25 dollar fee. They did nothing for 59 dollars. I am working with my cc company now to stop payment. DO NOT USE THIS COMPANY.
Helpful (1)
Thank you
Fashion Nova
“DO NOT DO BUSINESS WITH THIS COMPANY”
Do not do business with this company, HORRIBLE customer service. I placed an order and paid for express shipping. Later that day I received an e-mail stating there were issues with the order and I could cancel. I canceled the order twice. forward a week later I get a text that my order has shipped. I have sent several -emails, no one ever responded. Called their customer service line and it took almost an hour to get a human on the phone. Now, when I get the crap, I have to send it back on my own dime, so not worth it, so furious.
Helpful (3)
Thank you

Casey hasn’t received any thanks yous.

Casey doesn’t have any fans yet.

Casey isn’t following anybody yet.

I cannot believe a site like this can advertise on the webpage of a state agency. I tried to get...