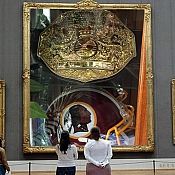 As someone has already said, if Jumbo doesn't like you, soon or later he'll ban you for some ridiculous reason. You ever wondered why they have so many rules? To weed out the people that they don't like for whatever reason. Nobody follows all those rules. I've seen Mods break rules left and right. I've seen certain other posters break rules. But when someone they don't like breaks one, you'll either get banned or suspended. The tailgate is pretty good though. But stay out of the stadium at all cost.

This site isn't worth it.

Bill hasn’t received any thanks yous.

Bill doesn’t have any fans yet.

Bill isn’t following anybody yet.

I was a long time member on the site. I took some time off the site only to find out my account...

Don't bother signing up for this site. Sooner or later, Jumbo, a bully mod with nothing going on...