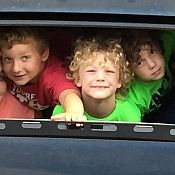 RedRoseTea
“Advertising is deceiving!”
I purchased 2 of your 100 ct boxes of tea in Dublin Ga, both boxes said American Heritage Figurine inside. That was not the case, No figurine was inside either box. My mother and I both collect your figurines thus the reason I purchased 2 boxes. My first thought was, they must have had a mishap in the factory where they were packaged and I can understand that.

I live in Columbus Ga, so I thought I would purchase two boxes there, both boxes said the same thing
American Heritage Figurine inside. I took my mom her box and the same results, No figurine! My mom took out the pamphlet in the bottom of the box and realized that you can only get your figures online.

What bothers me is your advertising is deceiving, your packaging says theres a figure inside. And the pamphlet found in the very bottom of the box says, Red Rose Figures are Moving Online. It doesnt say they have moved online, it says are moving online.

Im upset and very disappointed, the joy Ive watched on my moms face (who is 82 yrs old and home bound except for doctors appointments) when she would open her box of tea were always exciting to watch and priceless to me.

I am Sorry to say but we wont be buying anymore of your red rose tea. The 4th box, not included in the picture below, is unopened and Ill be returning it to the store where it was purchased.
Babs
Helpful (0)
Thank you

Babs hasn’t received any thanks yous.

Babs doesn’t have any fans yet.

Babs isn’t following anybody yet.

opened 2 boxes of tea no figurines help where are they can not contact...

To Whom it may concern, I have enjoyed Red Rose tea for many years, until now. The tea has...