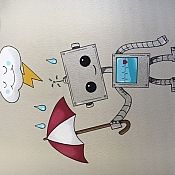 Puremoving
“Pure Moving Systems - Nightmare”
My experience with this company was terrible. I should have known something was up when the movers showed up in a Budget rental truck. I called the company to ask why they were not using one of the company trucks shown on their web site. I was told that when they get real busy they often use rental trucks. In addition, after I expressed my concern about the movers, they assured me that the movers were all professional movers. Yeah! Right!

There was so much damage to my things. Boxes smashed, ripped, torn; an expensive oil painting I paid extra to have custom packed was torn from the frame; a new washer was now dented; a handle dangling from the dining room server; a dresser drawer and the bottom of the dresser was damaged; lots of glass heirlooms destroyed; a patio table was missing its legs; nuts/bolts were missing from items that they disassembled; etc.

I contacted Pure Moving Systems the day after delivery about the damage and about having the movers return to assemble the items they failed to assemble or properly assemble and to move items to their correct places. Despite repeated requests, the request was ignored until weeks later when they basically said they would come that weekend but only to assemble a couple of items and if I wasn't available the matter would be dropped. How convenient for them to get out of fulfilling their obligations since I had told them I would most likely be in another state. I ended up moving things and assembling or reassembling items myself. For example, a queen size platform bed had a custom bold laying on the floor. After removing the mattress and box spring I found almost all the bolts were barely tightened. Worse yet, not one single screw was found in all the cross slats which support the mattress. They lost those as well. I was so angry I sent them the following email:

Today I decided to try to assemble the queen bed that your people took apart but failed to correctly reassemble; this was made obvious by the bed's custom bolt found laying on the floor next to the bed. I don't know why anything surprises me about your sham of a moving company but surprise surprise ALL TWELVE OF THE SCREWS THAT HOLD THE CROSS SLATS ARE MISSING. Obviously your employees, or perhaps day laborers, don't give a dam whether tasks are properly completed. I would think that this would bother your company but since your company is nothing more than a joke I know it won't.

Three movers came to pack my things in Bakersfield yet only one showed up in Las Vegas for delivery. I explained to the driver that there was no way he could do that by himself because my stuff was heavy. When I contacted the company they tried to tell me that the other person scheduled was suddenly ill. Totally contradicts the fact that their driver had already told me that he was the only one scheduled to off load everything. Much, much later that afternoon another helper showed. He told me that he is a landscaper just helping out. They didn't leave until late that night. And because it was late, they refused to place anything further in their proper location or reassemble other items the movers took apart. Just as the rental truck was leaving, I ran outside and flagged them down. I insisted they bolt the 68" H x 16" D x 60" W top of the china cabinet to the bottom. After all their people are the ones who removed the bolts and took it apart. Furthermore, with all the glass in that 5' 8" top I would have thought they would have used some common sense and secured it instead of just sitting it on top of the bottom unit.

Although I rated the mattress I really don't know. This mattress (actually two queen sets) was ordered on Oct 6. Today is the 8th of Nov and I still haven't received my order. When the sales clerk asked what the best delivery day was, I said Monday. To the delivery firm it means no other day will ever be considered. The first time I called the delivery firm, the number was bad. When I called the following week I was told I wasn't scheduled for that week, or any other week, and they would get back to me. The week after that I was told the same thing except he assured me I would hear by Friday. The following Monday ditto. I finally called Penny's Customer Care. After the Associate worked with the trucking firm I was told they could deliver Nov 5. I would be in Vegas then so we agreed that they would TRY for Nov 3. If they couldn't do it, then it would be delivered on the 7th. No surprise here, they didn't deliver on the 3rd, and I wasn't scheduled for the 7th. Long story short, I'm told the delivery outfit doesn't deliver in Bakersfield routinely, and JCP supports that. I'm now scheduled for the 12th. That's 5-1/2 weeks. Worthless service!

I would not recommend this to a friend.

JCPenney
your review was not approved
Thank you for submitting a review about Sealy Posturepedic Meadowlark Cushion Firm Euro-Top - Mattress Only. Unfortunately, your review did not meet our guidelines to be eligible for publication on our site.
You can view full guidelines here and resubmit your review.
Thanks for being an active member of the JCPenney community.
Sincerely,
The JCPenney Team
Helpful (0)
Thank you

Arda hasn’t received any thanks yous.

Arda doesn’t have any fans yet.

Arda isn’t following anybody yet.

I've been waiting several days to get one simple photo approved. I also cannot access my account...