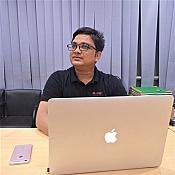 Payoneer
“Payoneer!”
It's a mind-blowing payment online system I have seen ever. I started using 7 years ago and uncomfortable transaction I have done. Never faced a single error or difficultly.

I withdraw using their master card, bank. I got my all payments at exact time.

I love payoneer so much.

Helpful (0)
Thank you
Google
“Google, the giant of the current civilization!”
Is Google knows everything on the earth?
Is Google keep info More than Wikipedia?

Maybe not, but Google can help people a lot. As I'm a blogger, Google is a blessing for me.

Helpful (1)
Thank you
Jvzoo.com
“Its a huge site for affiliators”
As I'm an affiliator I love so much jvzoo. I get all the products which I wish to promote. Highly recommend it.
Thank you.

Helpful (0)
Thank you
Zoom
“Zoom meeting is mind-blowing!”
I use Zoom meeting app every week for our team meeting. It has great features to hold a successful meeting. I and my team enjoy it.

Helpful (2)
Thank you
Freelancer
“Father of freelance platform!”
I was oDesk freelancer since 2011 to 2015. In middle of 2015 I switched to freelancer.com. Why?
1. This is the largest freelance platform.
2. Available Buyers and Freelancers.
3. Solid payment terms.
4. User friendly interface.
5. Various type of facilities for both (employee and freelancers)

But still have some scope to improve, I'm suggesting time to time, if they evaluate users concerns. Like - If they decrease freelancers project charges, it would be much better.

Helpful (0)
Thank you
LinkedIn
“"Linkedin" a playground for professionals!”
Can't explain in few words how much benefits for a person. This is not for time wasting portals. I requested to all the career lover people to daily keep in touch with Linkedin.

There is no problem just without paid features. I will be more then better if they open some paid features for free.

Helpful (0)
Thank you
Upwork
“Over quality is painful for user!”
Everything fair till it's limit. Upwork terms and conditions gone out of limit. They never valued freelancers, treat like servant. It's my experience, I used upwork around 5 years. They kicked me for the outside issue that was not properly upwork matter. First time they suspended my account with huge money. I requested to give my earnings, they did but lately after huge request. Then they permanently suspended my account.

Again I opened account, verify and work over One year. One day they asked me to give a live interview, I did an passed. After few months they again suspended my second account permanently without any reason and said that they will never respond my further queries. I don't know why? I never did any suspecious activity anymore.

So now what I'll say about this platform? You guys are tell me please!!

Thank you in advance.

Anwar hasn’t received any thanks yous.

Anwar isn’t following anybody yet.

It was fast, effective and very professional. I will say maybe more of information that was...

The response was Swift and the issue on my account was resolved.