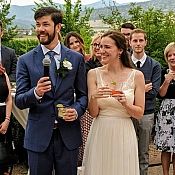 Blooms By The Box
“Save yourselves the money and emotional stress and stay far, far away.”

If I could give it 0 stars, I would. The flowers arrived mostly wilted, rotting and smashed. A lot of the foliage was shriveled and dried up and they must have run out of one of the things we ordered because instead of sending us eight counts of it, we received four plus four of random foliage that did not match. I was working with a professional flower arranger and she had never seen anything like it. She could tell immediately that the flowers weren't fresh, but we still had to jump through hoops to get just a partial refund. We had to run to Costco to get fresh flowers we could use and cut some of the foliage from my garden. This all happened on the day of my bachelorette party, 2 days before the wedding. Save yourselves the money and emotional stress and stay far, far away.