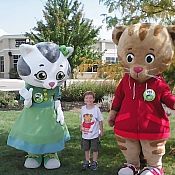 I took my seven year old child into Kroger to cash in his coins at CoinStar tonight, only to have a large amount stolen! We counted out almost $73 dollars in change before going, only to be given a voucher for $37.93! I went and spoke to the manager "Lee Ann" about this, only for her to act nonchalant, and uncaring about it. She said there wasn't anything she could do, for me to call CoinStar. NOT TRUE! I did call them, to find out she should have got inside and got all the loose coins NOT IN THE BLACK BOXES, and re feed it thru the feeder! I was told to go back up there to get my money back. I went back, and the Manager(G. M.) "Lee Ann" came walking up with a man named "William". I told her what I was told and she started to call someone. My son standing by this "William" came running up to me and said "Daddy... he said I don't know and I don't care!" I turned to him and said "What? What do you mean... and then I turned to "William" and said what did you say... for him to say, "I told him I Don't Know and Don't care"! He did this in front of the G. M. and when I said are you going to let your employee talk to my child like that? She said. He didnt say that! I said "yes he did, RIGHT IN FRONT OF YOU!" She turned to William and he said. "YEAH I SAID THAT!" She didn't fire him, as she should have on the spot for being blantantly rude to a child inside a Kroger store as an EMPLOYEE and REPRESENTATIVE for Kroger! #BOYCOTTKROGER

This Facility is ran by an uncaring Woman by the name of Carol Dozier. Even when she KNOWS her staff acted Negligently, and endangers a patient, she does not terminate them, nor make reparations with the patient who was a victim of such negligence. I have attempted several times to contact her to INFORMALLY resolve neglect issue, only to be shunned by her! DO NOT TRUST THIS FACILITY! I have Myocardial Ischemia, and was sent to the E. R. by my Physicians office, due to a pain in leg similar to a DVT. I never received even ONE TEST, and was sent out the door with a Toradol shot I never wanted, and because I said I didn't want that, the N. P. that seen me, falsely put in my file I was exhibiting Drug seeking behavior! Do not take your family there if you truly care about them. Go to Clarksville, Jeffersonville, Shelbyville, ANYWHERE but there!

Tip for consumers:
NEVER take anyone with a Serious, or Life Threatening injury/illness to this Facility!!

In 2017 I was involved in an auto accident in my 2007 Ford ranger. My driver side airbag never deployed during the front end collision, causing me to impact with the steering wheel breaking my sternum. I was in the hospital for several days, and only released because I made them let me out of the hospital, due to having a five-year-old child with no one in that City to help me care for my child, and no family able to assist me either. So I was forced to either let my child go to a foster home while I was in the hospital, or sign myself out of the hospital to take care of my son. I reached out to Ford customer relations about my incident, only to be dealing with an unethical emerald person by the name of raddell. Forgive me if the spelling is wrong, because I didn't ask him for that. When I spoke to him and told him that I had been involved in an accident, and that I had received a recall notice for my passenger side airbag, he asked me several specific questions about my driver side airbag, and said that even though it wasn't part of the recall, he was going to escalate this and create a ticket for someone to contact me about my driver side airbag never deploying. In December 2018, after not hearing from anyone for an extensive amount of time, I reached out to the same customer relations department. I again spoke with the same gentleman, as Fortune would have it, and explain to him that I had never heard from anyone. He told me that there was no ticket in the system for my problem. When I told him he was the one I spoke to, he said if I had dealt with your problem I would have wrote up a ticket. When I said well you did not do your job then, because you are the person I spoke with, I wrote your name down, he hung up the phone on me. I had to call back in and demand to speak to a supervisor, who guaranteed me that this gentleman would no longer work for the company if he failed to generate a ticket. They cannot find a ticket that this gentleman generated, but yet as of today's date, January 21st 2019, the same gentleman still works for that same Department! During my conversation on December 13th, I was promised by a supervisor with the name of Ferdie I would receive a call from general counsel within 15 days. 15 business days that is. Here we are in January, January 21st, and I have not heard anything from anyone! So I tried to call in today to discuss this issue with Ford customer relations, only to be hung up on multiple times! I was never put in touch with the supervisor like I requested! If you are looking to find a car, that has a customer service department that cares about their customers, clearly you can no longer trust Ford to be that company! If they cannot take care of a man who almost died because the airbag never deployed in his vehicle, making him impact with the steering wheel so severely it broke the hardest bone in the body to break, then this is not a company you would need to be dealing with!

Just as you wouldn't take your child and leave them with a child abuser to keep an eye on them, or to guide and direct them for the time that you're absent, you should not take your children to centerstone, as they are child abusers themselves! They abandoned my seven-year-old emotionally disabled child, and completely ignored his placement in, and need for, the state of Indiana Medicaid wrap around program! They also we're not seeing him for individual counseling, as he needed to be seen, and has committed an overall failure and abandonment in the chair of the seven year old child! Centerstone blocked me from posting comments on their Facebook page because they don't like the public to know the truth about them that they abandon and hurt this child, then the CEO of the company David Guth Jr. Refuses to help place the child back to the environment that he moved from and the counseling he was receiving, to fix the harm that they've cost! This is an agency of child abusers, from top to bottom, and should not be allowed to continue to operate business! If they'll hurt one child, would you take a chance on them hurting another? If a man is accused of one sexual offense against a child, would you let your child be baby sit by him to see if he would do it again? These people in this organization committed a serious harm to a seven-year-old child, please help me spread word so that way no other children can be harmed by them!

Whatever you do... BEFORE you order from Laithwaite Wines, READ THIS REVIEW!

This company has committed FALSE ADVERTISING, and if they cannot HONESTLY and ETHICALLY stand behind their advertising, then they cannot be trusted with the words they speak about their products! DO NOT TRUST THIS COMPANY!

AJ hasn’t received any thanks yous.

AJ isn’t following anybody yet.

I just shopped there yesterday and they had a sale on banquet baked chicken dinners. The sale was...